You have writing. We make it better. 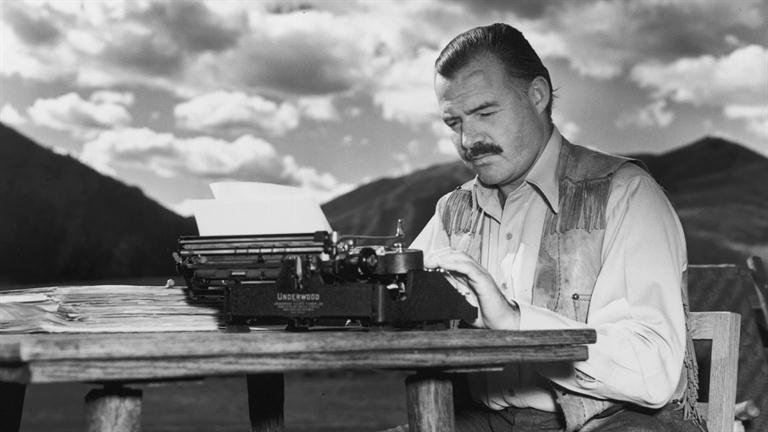 “There is nothing to writing. All you do is sit down at a typewriter and bleed.” – Ernest Hemingway

Hemingway is one of my all-time favorite writers (and not just because I had to read him in high school, either). His prose is crisp, clean, and compulsively readable. He wrote with a journalist’s flair for storytelling but a copywriter’s command of simplicity and conciseness.

But even Hemingway sat down at the typewriter and just bled sometimes. Writing can be very hard. And writer’s block is all too real.

How did the great writers of our time get past the hurdles of putting words on paper? In all sorts of interesting ways, apparently. Here are 8 things great fiction writers do to beat writer’s block and stay in flow:

1. Accept distractions and push through them

E.B White, the author of Charlotte’s Web, didn’t look for ideal conditions but pushed through less than ideal ones by accepting that distractions are unavoidable.

“I never listen to music when I’m working. I haven’t that kind of attentiveness, and I wouldn’t like it at all. On the other hand, I’m able to work fairly well among ordinary distractions. My house has a living room that is at the core of everything that goes on: it is a passageway to the cellar, to the kitchen, to the closet where the phone lives. There’s a lot of traffic. But it’s a bright, cheerful room, and I often use it as a room to write in, despite the carnival that is going on all around me.

“A writer who waits for ideal conditions under which to work will die without putting a word on paper.”

Haruki Murakami, acclaimed Japanese writer of A Wild Sheep Chase and Norwegian Wood, believes in rigorously training both his mind and body. Not too surprising, since he wrote a novel called What I Talk About When I Talk About Running.

“When I’m in writing mode for a novel, I get up at four a.m. and work for five to six hours. In the afternoon, I run for ten kilometers or swim for fifteen hundred meters (or do both), then I read a bit and listen to some music. I go to bed at nine p.m.

“I keep to this routine every day without variation. The repetition itself becomes the important thing; it’s a form of mesmerism. I mesmerize myself to reach a deeper state of mind.”

This makes plenty of sense; we’re all creatures of habit, and with enough practice we can get used to anything—even writing for 6-8 hours a day (which any professional journalist, copywriter, or novelist has to do on a daily basis). If that sounds too daunting—try NaNoWriMo the next time it rolls around. I guarantee you’ll be surprised at what you’re able to accomplish.

A slew of famous writers, including  Marcel Proust, William Wordsworth, Edith Wharton, and Truman Capote, were bedbound while they wrote.

“Wharton would designate the early morning to writing… she would write while still in bed…When she completed a page, she would let it fall to the floor, where a maid would then pick it up and give it to Wharton’s secretary to type.”

You might not have a maid or a secretary, but you can certainly try to set aside your cell phone and keep a notepad or laptop by your bedside instead. The same goes for your commute (assuming you don’t drive). Instead of whipping out your cell phone and going on Facebook, try to write instead. You’ll be amazed at how well you can focus in transit, when most of your daily distractions are out of the picture.

Vladimir Nabokov, writer of Lolita, built his story structures and compositions with a system of color-coded index cards:

“Beginning in 1950, he composed first drafts in pencil on ruled index cards, which he stored in long file boxes. Since Nabokov claimed he pictured an entire novel in complete form before he began writing it, this method allowed him to compose passages out of sequence, in whatever order he pleased…”

You might not have your whole novel already written in your head like Nabokov, but the index card method let’s you easily rearrange your story in an intuitive way. The limited space of an index card also forces you to be concise.

5. Get naked and get focused

Victor Hugo forced himself to write the Hunchback of Notre Dame by removing his clothes and his excuses:

“Victor Hugo used contingency management methods while writing his novel, Notre-Dame of Paris. He had been down in the dumps, finding it difficult to get started. Hugo then hit upon the idea of confining himself to his writing room after having his valet lock away his formal clothes ‘so that he would not be tempted to go out’, as his wife put it. Lacking any suitable clothing until he finished his daily writing session, Hugo had no choice but to work on the book instead of goofing off and procrastinating.”

Hugo understands the appeal of procrastination, ever writer’s best friend. But by putting himself in an uncomfortable situation he made writing the means for a reward. You can do the same thing to incentivize yourself. Maybe ask your spouse to hide your shoes, or turn off the cable and internet.

Make writing a hobby you can enjoy

Most importantly, if you want to get better at writing—write intentionally every single day. But not if it’s a chore. Find what you love to write about, what you’re passionate about exploring each time you open up a Word doc (or Google doc). Stephen King, who wrote On Writing, has this to say about why he does what he does:

Congrats on having great marketing!

If you change your mind, reach out to us with the subject line HELP and we’ll do a free one-hour branding review.